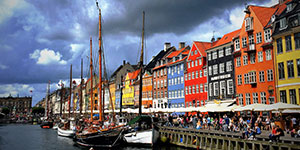 The following article is translated from a June 2017 edition of Berlingske:

Mille is one of the many resourceful citizens Copenhagen has had more and more of during the past decades. The citizens who have been part of changing Copenhagen from an industrial city to a knowledge city with clean streets, renovated apartments and a city life worthy of social media. But she is also an example of the housing situation that can make it very very hard to get a foothold in Copenhagen.

“It was extremely hard to get an apartment. All I could rent was a 1-bedroom place in Sydhavnen for 12.500 kroner + utilities per month. This was more than half of my net income each month,” Mille Jensen says. Her budget was ca 10.000 kroner per month, and to avoid competition from the many students in the city, she looked for +6.000 kroner rooms in shared apartments. This was how she got to rent a room in a house in Søborg, where 2 people lived in the basement and she and another woman lived on the ground floor. The landlord lived on the first floor. This was the situation a month and a half, until the landlord decided that the other tenant could not have her boyfriend visit her. “He threw her out because her boyfriend visited. I told him that it was illegal to throw her out like that and then he kicked me out as well and had all of my belongings removed. It is crazy to be new in a city like this, but I am lucky to have a job at a place where people have some means and have offered me to stay in guest rooms around the city. Mille ended up buying an “andelslejlighed” (a share in a cooperative housing association) and today she is happy. But this experience tells me that something is seriously wrong with the Copenhagen rental market, if landlords can act the way they do. They have too much power because people feel hopeless and vulnerable.”

She declines to having been too naïve: “I think it is spoiled to think that you can get a city centre apartment for 5.000 per month, but I actually think that I had a reasonable budget. And still it was impossible. Having to buy an Andelslejlighed was absolutely not my dream, but it turned out to be the only solution to the Copenhagen rental nightmare.”

As this article describes, the situation in Copenhagen is problematic in multiple different ways. The huge demand for small, cheap apartments (caused by a few different factors, as described here) means that landlords have all the power, because they have a never ending supply of potential tenants. At Charlie’s Roof we can elevate your chances of getting one of these hard-to-access apartments, because we have direct contact to the landlords. But also, by working with us and our reputable landlords, you avoid the negative situation with a nasty landlord that Mille describes above.